Our primary role, as trustee, is to ensure the benefits promised to USS members are secure. We also care about the sustainability of the scheme, so we want the contributions required to secure members’ promised benefits to be as low as reasonably possible. This balance of judgement is the outcome of a scheme valuation, which must be held at least every three years.

It’s coming up to two years since the date of the 2020 valuation, and it’s a little over six months since we published a paper on the likely outcome of a 2021 valuation.

This note provides an update on developments since then.

The 2020 valuation was agreed by the trustee and filed with The Pensions Regulator at the end of September 2021. The outcome was a deficit of £14.1bn (the scheme’s assets were valued at £66.5bn but its liabilities, on a Technical Provisions (TP) basis, amounted to £80.6bn).

Since October 2021, employers have been paying 21.4% of pay, while members have been contributing 9.8% of salary – 31.2% in total. From April, some 6.3% of that total rate will go towards recovering the £14.1bn TP deficit (in respect of benefits already promised), with new benefits requiring contributions of 24.9% of pay.

That outcome is based on the introduction (from 1 April 2022) of the benefit changes the Joint Negotiating Committee (JNC) decided to put forward in late August 2021 and associated additional covenant support measures provided by our sponsoring employers.

Without those new arrangements, we couldn’t afford to be as optimistic in our funding assumptions and the outcome would be very different: for the current benefits and a far more limited package of covenant support measures, the TP deficit would stand at £18.4bn (with liabilities at the valuation date valued at £84.9bn instead of £80.6bn) and contributions would be higher.

These outcomes are both based on data ‘as at’ 31 March 2020. We have continued to monitor experience since the valuation date, as detailed in our paper on the likely outcome of a 2021 valuation and, indicatively at least, in the Financial Management Plan (FMP) dashboard reports published on our website.

As has been widely reported, since 31 March 2020 the value of the scheme’s assets has recovered to pre-pandemic levels and now (as at 31 January 2022) stands at £89.3bn. But this is just one part of the overall picture.

Active members are accruing new benefits every day – adding to the value of the scheme’s liabilities. Any underfunding of these new promises could lead to the value of the scheme’s liabilities growing at a faster pace than the value of its assets – creating, or adding to, a funding deficit. The amount of contributions required to adequately fund new benefits depends on estimates of future investment returns. All things equal, lower expectations for investment returns in the future means increases in the ‘future service cost’ to fund the same level of benefits.

Our FMP reports monitor market conditions between valuations. They seek to provide indicators as to whether the USS Board might want to check the ongoing adequacy of the funding plan and consider further action – in particular, whether contributions are likely to be sufficient to continue to cover the cost of new benefits and repairing the deficit. (Importantly, these reports are not a prediction of the likely outcome of a valuation at any particular date – a full valuation requires substantial first principles analysis and overlaying judgement by the trustee.)

Our last published FMP report, under the assumptions agreed for the 2018 valuation, indicated that market conditions at the end of August 2021 might predict a £14.9bn TP deficit (assets were valued at £89.6bn, but liabilities stood at £104.5bn) with a future service cost (covering the current benefit structure) of as much as 44.5% of pay.

At that time, members and employers combined were contributing 30.7% of pay – a potential 13.8% shortfall on the cost of funding new benefits alone, if these market indicators (used for monitoring purposes) were to read through to the assumptions that might be made in a full valuation.

But this report, like each one published before it, was based on monitoring of the assumptions underpinning the 2018 valuation and maintaining the current benefit structure.

The 2020 valuation was signed off by the trustee in September 2021 and is based on different benefits, a different set of assumptions and a different methodology. As a result, we are no longer monitoring the scheme on the 2018 basis.

The monitoring framework needs to be reconfigured in line with the 2020 valuation and, crucially, will need to be consistent with the benefit and contribution arrangements that will apply from 1 April 2022. Confirmation of these arrangements is expected from the JNC this month. We therefore expect to be in a position to publish our monitoring of the 2020 valuation from March 2022 onwards.

So, what’s been happening?

Our interim 2020 monitoring, over September 2021 to January 2022, shows a great deal of volatility. It also demonstrates how asset values are only part of the picture: the overall funding position can only be understood by looking at the likely cost of fulfilling the benefits currently being accrued by members as well. Figures one and two indicate that, under the new benefit and covenant support arrangements proposed by the JNC: 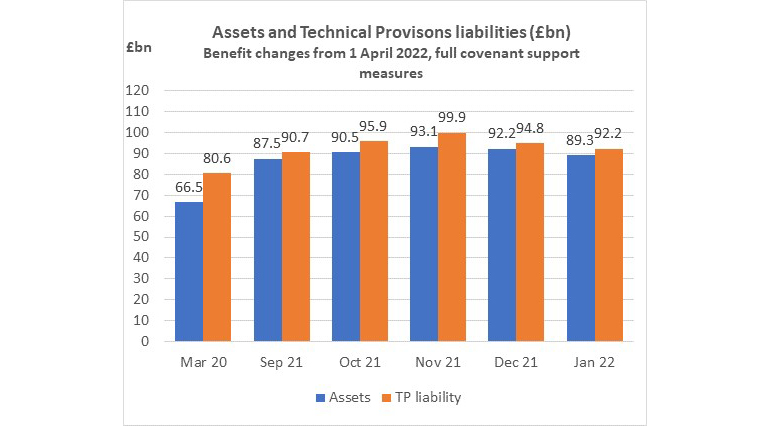 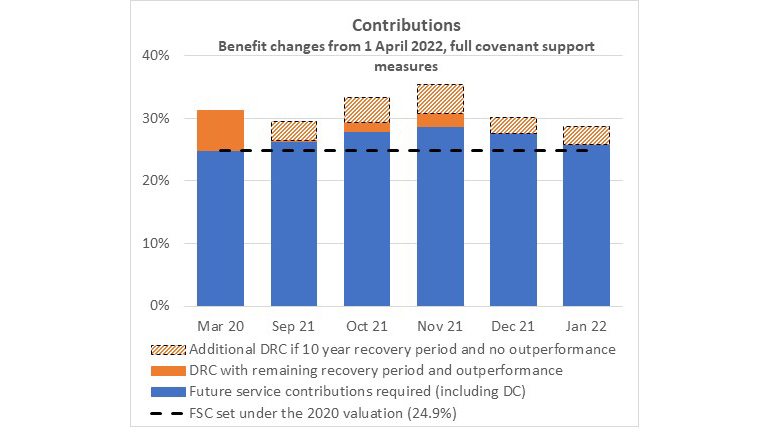 The implied cost of the new benefit structure, which has been as high as 28.7% of pay and as low as 25.8%, has consistently indicated a potential need for higher contributions than the ‘future service cost’ set under the 2020 valuation (24.9%) and in our paper on the likely outcome of a 2021 valuation (25.6%).

With the overall contribution rate set at 31.2%, we would appear be on track to achieving the kind of sustainable, affordable outcome the JNC’s proposals are designed to secure. But only if what are market indicators (used for monitoring purposes) were to read through to the assumptions that might be made in a full valuation.

Crucially, however, the figures above are based on the JNC’s proposed reforms. A key factor in recent months has been the impact on the future service cost of the proposed 2.5% cap on annual inflation protection. This is due to come into effect from 1 April 2022 (or 1 April 2025 onwards under the proposed adjustment on which UUK is currently consulting employers).

The pensions promised to USS members are currently increased every year broadly in line with inflation. Inflation is now expected to be higher than 2.5% in the short to medium term. While this has increased our liabilities (the cost of fulfilling the pensions already promised to members), the JNC’s proposed cap limits the impact on the cost of new benefits.

Absent the JNC’s proposals, the indicative position at the end of January, for example, would be quite different: an implied TP deficit of £7.3bn, with the existing benefit structure potentially requiring contributions of 42.2% of pay. As above, at 31 March 2020, these figures stood at £18.4bn and 37% respectively.

These arrangements are illustrated in Figures 3 and 4. 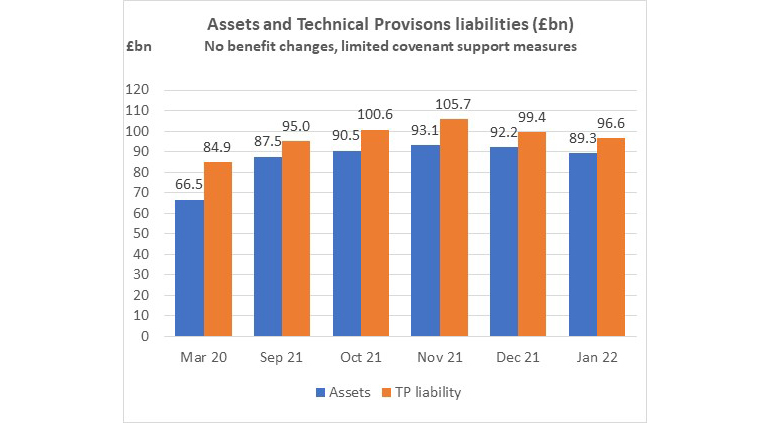 It is very difficult to reach any definitive conclusions as to the true direction of travel based on the last few months alone.

The TP deficit is almost certainly lower today than it was at 31 March 2020. But the ‘future service cost’ – the contributions required for promising a set, inflation-protected income for life in retirement, paid no matter what happens to the economy or the HE sector in future – has continued to rise.

Financial markets have exhibited significant volatility, and the challenge remains steering an appropriate course for the long term. We are completely focused on the security of the benefits promised to USS members, and the sustainability of the scheme.